The “Taste of Tucson” presentation was an evening filled with tidbits of information that left everyone wanting for more. It was truly an information-packed evening with many unusual items to be examined and shared.

To start off, Bobby Mann gave a enthusiastic historical overview of the Tucson Gem show history. Naturally it did include a dead Elephant (you needed to be there) and a fascinating chronology not previously known to many of the regular Tucson attendees. Tucson has been inhabited continuously for 4000 years and 7 million specimens are shown there during the gem show. With 34 Gem Shows covering 9 miles, it is the largest gem show in the world. In 1946 the Tucson Gem and Mineral Society organized and the show started a few years later with 9 dealers in a school auditorium. In 1972 the now famous Tucson Gem and Mineral Show moved into the new Convention Center and has been there ever since. The many shows now cover an ever-expanding time span of more than two weeks during the first part of February, and the show that started it all now ends the two week gem-feast. What once was the meeting place for prospectors, miners and collectors is now a necessary educational pilgrimage for gemologists, retail buyers, geologists and dedicated hobbyists. It has truly become Mecca for those who live by the words on an old bumper sticker that reads: “Old Rockhounds never die, they just go to Tucson!”?

Harold “Hap” Williams and his wife Dee were our Tucson Rookies this year. Hap gave us a view of what were the highlights for him. He mentioned things that old-timers often forget: the beautiful setting, the gorgeous hotels, and the well-working shuttle-bus service. The AGTA show seemed to have left quite an impression on him. Its bylaws covering treatment disclosures and the knowledgeable and forthright dealers confirmed that this show has achieved a standard that allows buyers an unmatched level of comfort and ease, not necessarily so with some of the outdoor shows. Harold and Dee’s new find was Saraphinite, a pretty dark green material from Siberia. They also recommended the many wonderful bookstores, antique stores, and encouraged bringing plenty of cash. It looks like they will likely return to Tucson next year. 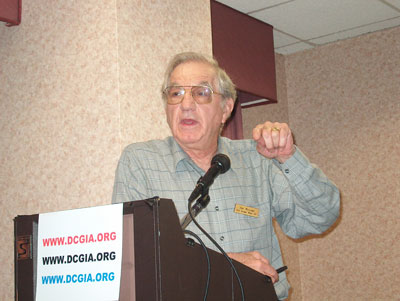 Bruce Gaber’s photos allowed everyone a glimpse into the world of mineral specimens. He shared his “best of the best” and some of his personal favorite finds, like a marvelous piece of Patagonian Condor Agate. Bruce’s Tucson treasures included great shots of a very showy $400 specimen of Barite from Huanunco, Peru and white and yellow Calcite on Calcite from Artigas, Uruguay. Bruce spirited everyone’s mind away and beyond faceted and hand-structured materials into a world of absolute natural magic, of unusual formations, and of color combinations and textures rarely seen anywhere in the world. An exceptional $3000 Mexican Fire Opal left us wanting more. 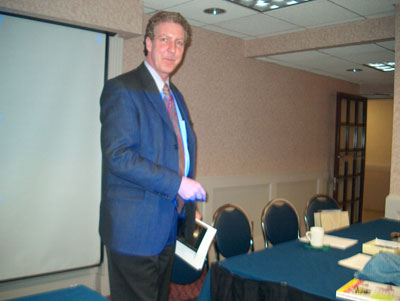 Pricing and trends were covered by Martin Fuller. Martin is a firm believer in ongoing education and is a Tucson regular. He takes advantage of the many opportunities offered at the shows to expand his knowledge and to do research. He started to attending the shows in 1990. Martin emphasized the importance of using proper terminology as is the case with the various “Paraiba” named gems being marketed at the gem shows. It was very informative to hear about the current pricing changes and availability of material like Zircon. Changes in foreign Government regulations regarding the use of dynamite will change the availability of some gems that might once again become more readily available. The international marketplace has been affected by unfavorable dollar exchange rates and therefore it is likely that the consumer will see pricing changes in the near future. These detailed facts are essential for those who trade internationally and buyers for the American marketplace. The prices of Oregon Sunstone reflected its raise in popularity with some as high as $150 a carat. Martin agreed with Richard Drucker’s prediction that the interest in purple Sapphire is growing, also because nice material is available at fairly reasonable prices. To sparkle up an already very colorful presentation Martin brought with him a Painite specimen. It is listed in the Guinness Book of Records as the rarest mineral on the planet, and only 3.3 kg have been found so far. Thanks Martin for such an information-packed selection of hard facts and sharing such a rarity with everyone!

Our next speaker was Denise Nelson covering the topic of “color.” As always, there was plenty of it in Tucson this year. With one exception, one had to look hard for “natural” colors. There were many more gemstones with new unusual hues and colors along with low prices. Could it possibly be that the high cost of gold and other metals has produced a design-trend? Larger, low-priced stones can make up in showy-ness what the design lacks in metal. This may explain the apparently steady sales of 5+ ct low-priced gems. It may also explain why so many new color enhancements are found in the low-end gems like Topaz and Quartz, Green “Amethyst”, “Lemon” Quartz, “Raspberry” Topaz, “Mango” Topaz…..a buffet of color enhanced and “fruity” gems. 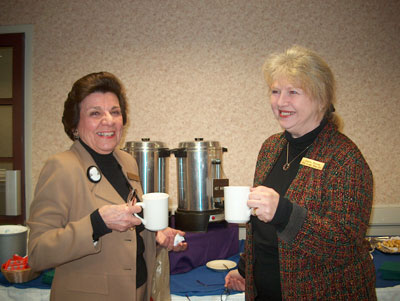 Brazilian Emeralds equal in color to their Columbian counterparts will be easier to purchase in the future due to new mining technology being imported from Europe. Especially the Belmont mine in Minas Gerais shows a lot of promise. Large quantifies of fine Tourmaline in all colors at very good prices are finally showing up in larger sizes. Tanzanite marketing will be worth keeping an eye on. Sight holdings and restricting the access to the freshly mined material may create a De Beers-like entity, and this area bears watching. A new marketing firm has started an aggressive advertising campaign, which depending on economic and financial developments, and the availability of large quantities of this relatively rare gem-stone, may or may not be a success. 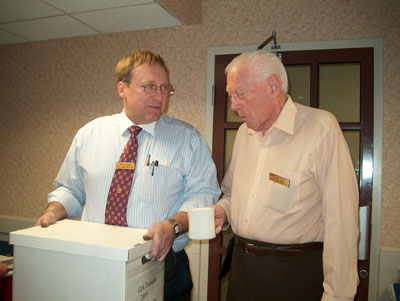 Apparently this year petal-pearls are hot and small fresh water pearls are not! One dollar strands of Fresh Water Chinese pearls were so abundant and are of such low quality that table after table at the gem shows were heaping full of them and they were not selling. Some pearls showed extremely high luster, which could possibly be attributable to some undisclosed treatment. In contrast, large round to slightly off-round fresh water pearls, of mixed natural colors, demanded higher than ever before prices. Metallic-looking natural color fresh water pearls are in high demand by designers and can cost as much as $800 to $1200 per 12 mm pearl. Who would ever have guessed? Chinese production, which once was booming is now dropping off, most likely due to development of the coastlines and past overproduction of low-value merchandise. The lack of an internationally standardized grading system also brings with it inconsistencies in marketing and difficulties in comparing pearls from different locations.

Large White South Sea pearls are still demanding top prices. One slightly graduated strand of 15 to 19 mm pearls had a price tag of $94,500. New smaller 7 to 8 mm South Sea pearls with fine luster are described as being the first harvest of the South Sea Black Lipped oyster. Mixed-origin, multi-colored strands, created by mixing large round natural color peach, mauve, white Fresh Water pearls with silver or black South Sea Tahitian pearls, are very popular this year and have been seen with a $8100 price tag. Lois brought with her some very lovely, high luster Coin-shaped and triangle-shaped pearls. 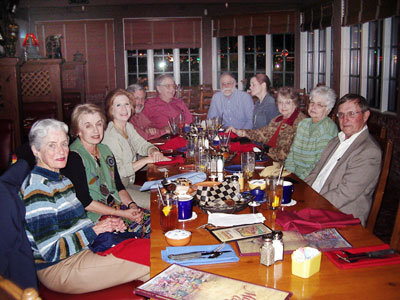 The Washington DC Chapter has always had a large number of members attend the Tucson show and every year they gather to share information (and to have fun) at a local Tucson Restaurant. This year the group got together at Mimi’s.