Our evening opened with a Happy Birthday song and cake for our prodigal speaker � Fred Ward. Fred moved to California in Nov. 04, but he is still a member of our alumni chapter and the keeper of our website. He travels back to DC each year to lecture to us. Tonight our lecture focuses on rubies & sapphires, and a surprise is promised.

The evening was filled with talk of Rubies and Sapphires

Fred gave us a history of rubies and sapphires � as they were used by the Greeks, Romans and Indian moghuls.

The stories of gems abound. A 500-carat ruby found in Mogok, Burma was taken to Thailand. Burmese soldiers invaded Thailand to return the ruby to Burma.

A man in Sri Lanka, digging in his basement found a 3965 carat crystal and sold it for more than 1 million dollars.

Fred told us of the different ways of mining in the various countries.

Sri Lanka has no traditional mines, the whole country is a sapphire mine. Rice farms are rented out for a season, dug up, mined, then restored so that it can be used for rice farming again. This process is done over and over. The sapphires that are found are heated overnight and can be found for sale in the markets the following morning.

In Burma, there was never a �wash� plant. The government decided to build a �wash� plant to separate rubies from the rocks. To finance this plant, the government became every miner’s partner… by taking a cut of the sales. Almost all the nice gems are sent to Thailand to be recut.

Vietnam is primitive � basically dig a hole and hope.

And the winning raffle ticket brought lots of laughs

When corundum was discovered in Umba, northeast Tanzania, 25 years ago, in one bucket you could find every color.

Australia has sapphires that for years were sold as Thai. We think of all sapphires from Australia as being very dark, but they actually come in nice blue colors. The Thais would separate out the good sapphires and sell them as Thai and leave the dark blue sapphires as being from Australia.

The Yogo Gulch mine is over 100 years old, but is not producing now. Because of the rarity of Yogo Gulch, the sapphires command a premium price. Five Americans bought land just across Yogo Creek, then had to dig underground. They found some sapphires, but not enough to make money. Other sites in Montana (mainly in western Montana) produce sapphires in an incredible array of colors. 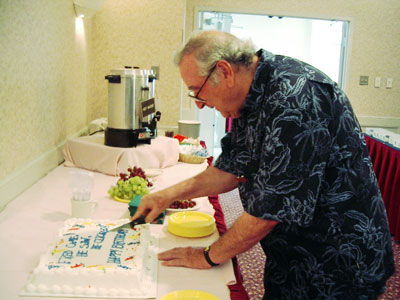 Cutting the cake for everyone to enjoy.

In Northern Tanzania, opaque ruby is surrounded by green zoisite, giving a watermelon effect. This material is used in carvings.

We are accustomed to the heat treating of ruby and sapphire. Now the treatment is beryllium being diffused into the stones, producing orange, yellows, and better reds and blues.

Synthetic sapphire and ruby boules are used today in a huge number of high-tech processes. They are used in computer chips, ruby lasers for surgery, and as the laser scanner with a sapphire top (instead of glass) in our grocery store checkout counters.

Our surprise was first photos (aerial) of Fred�s �mountain top� home in California. A true Shangri-La.

Then we saw upcoming photos from Fred�s newest book � The Phenomenal Gems. Or for us simpletons � “gems that do tricks.” We saw his photos of adularescence, asterism, aventurescence, chatoyance, color change, flame, fluorescence, iridescence, labradorescence, orient, and play of color.

Fred was kind enough to personalize & sign his books, which are sold as an income-producer for the DCGIA Chapter.

Courtland Lee set up a �show & tell� table with his �find� of Patuxent agate, the state stone of Maryland. 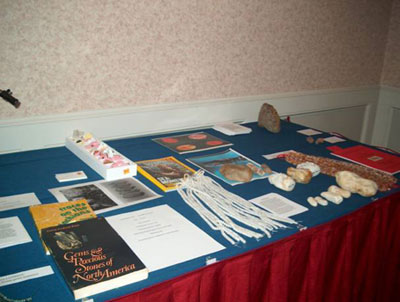 Several members brought in “show & tell” items for all to enjoy