A CASE STUDY IN FRAUD

Our evening with Gary L Smith provided a revealing glimpse into the intriguing world of Sherlock Holmes and CSI. �Forensic Gemology� is a popular topic and it filled the room beyond it�s capacity.

Gary, who owns the Pennsylvania Gem Lab, which is a laboratory dedicated only to forensic jewelry examination, was trained in Asia and Europe. He holds the title of �Master Gemologist Appraiser � from ASA and has more than 40 years of experience. He also has a truly impressive list of professional affiliations. Gary, who calls his craft �Investigative Gemology� presented a lecture filled with hard facts and showed great enthusiasm for this fascinating and intriguing subject. With roughly 80% of all antique period jewelry being �knock-offs� rather than authentic, it was a very educational, as well as cautionary message.

The main reasons for using a forensic gemologist are the following:

The scientific determination of causation or authentication requires not just the use of a large number of scientific equipment and expertise, but also needs a good amount of common sense and sometimes even a bit of luck. 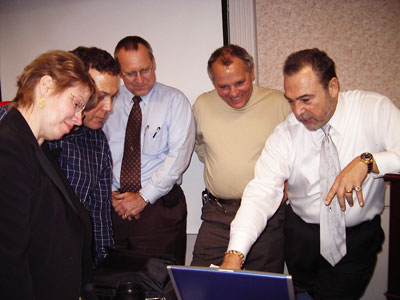 Gary revealed the secrets of a breathtaking neckpiece which supposedly was linked to Nikolai II in the 1896 – 1917 time-span. The very impressive looking necklace, laid out and stored in a fitted box in perfect condition, was supposedly made of Gulf-of-Bahrain pearls, with 150 carats of demantoid garnets, diamonds, and 22K gold. It exhibited exceptional craftsmanship. The hand-set gems and hand-azured mounting looked pristine and authentic. The piece presented many questions, and offered some surprising answers. One test, surprisingly not of the actual item but of the box-material, raised the first red flag! It was made of nylon fiber, unknown during the Romanoff period it was attributed to. Another quite obvious observation was the lack of any dust or dirt on the box and on the item itself. Next came the discovery that the metal used was actually 18K gold with a flash-plating of 22K gold. As luck would have it, one of the pearls was actually loose and could be examined closely. That revealed the pearls were actually Chinese tissue-nucleated and no more than 10 years old. An �intent to defraud, from beginning to end� became the final verdict.

Gary explained that he examines items in quadrants and makes the item �prove itself�. He emphasized inspecting the back as careful as the front, wearing cotton gloves, and using a good cleaner which does not destroy the patina. A good light-source and UV examination are a must.

Michele, Toby, Bobby, and Tony cooking the books before the 50-50 drawing

The history of �who saw it, who touched it, who breathed on it� becomes a intricate part of the discovery process. Metallurgy is used to identifying alloys, scratch-marks, plating, pitting, soldering, and the thinning of joints. This testing can pinpoint whether a piece of jewelry is truly of a certain time period or not. X-ray Fluorescent Spectronomy (XRF) can shed light on which metals, such as cadmium, cobalt or even arsenic, are present and therefore which time-span the item can be attributed to. King Edward II on April 11, 1300 made assaying and marking a rule, but it is well known that many items are not marked at all. 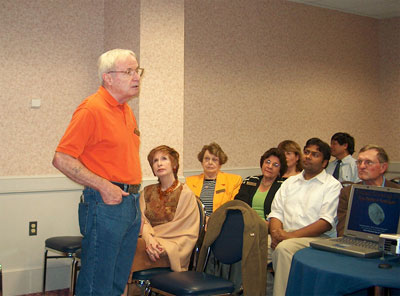 Today�s hot market for antique jewelry has created a hotbed for very profitable fraud, which has increased noticeably during the last decade. Many items offered for sale are actually made in the present, using old techniques and old gemstone cuts, mimicking those of the period they try to represent. For example, in Turkey the old craftsmanship has been well preserved. One family, after learning how to foil-set diamonds 5 generations ago are still experts in that craft and are creating �antique style� jewelry to this day. Properly represented as finely made replicas, these items are readily available and affordable.

Gary covered the use of artificial aging processes, the use of modern gems in old-style settings, and the abundance of replication often creating exact copies using old catalogs and drawings. Authentic antique handmade jewelry can be visually attractive, unique and unusual, and has the ability to create a feeling of nostalgia and occasionally comes with historical provenance. These combined traits make these items highly desirable, both as a collectable or as a re-sellable and highly marketable profitable treasure. Problems arise when there is a lack of disclosure and a disregard for the truth and the facts, resulting in deception and misunderstandings.

The next time any of us will look at antique or reproduction jewelry, possibly equal in beauty, yet vague in documentation, remember Gary�s words: �Don�t assume anything, ask questions� will be sure to echo in our minds.