A local expert named Eric Hoffman, who has been studying, buying, selling and writing about nephrite for over 35 years, gave the talk.

Nephrite has been highly prized in China for more than 5000 years. Whitish and yellow pebbles were discovered in the Karakash River in the Xinjiang Province. Karakash means “black jade” in Chinese. It is tougher than it’s better-known cousin, jadeite, due to a different structure.

One of the oldest known pieces of carved nephrite is a plow point dated 5000-7000 years old.

During this time, it was also carved in to axes, chisels and grain cutters. The uses were more utilitarian than ornamental. 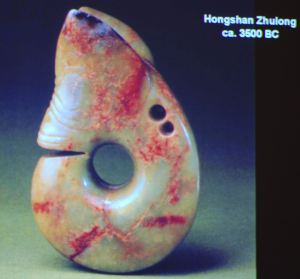 As time progressed to 3500 B.C., we began to see more three-dimensional carvings. These were done using bamboo with quartz sand imbedded.

There were no metal tools yet. Moving to 1500 B.C., technology improved to the development of metal tools and much more intricate carvings began to emerge.

Even though nephrite can come in natural colours other than green and white, by the time of the Ming Dynasty, colour was introduced to the carvings in the form of dyes and stain. 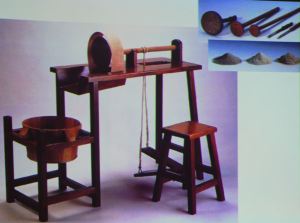 The challenges that one can face when buying nephrite include determining if it is, indeed, nephrite, is it old and is it Chinese? One can perform various gemological tests for the first challenge. 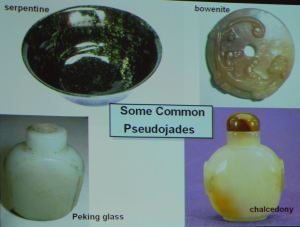 Other possibilities would be serpentine, bowenite, glass or chalcedony. Hardness, refractive index and specific gravity should do the trick.

As for Chinese origin, the motif of the carving would be considered. Some Indian motifs have been confused for Chinese. One must study the historical aspects to be able to determine this.

The age is the most difficult to assess. Since there is no scientific way to test for this, other methods must be employed. Motif as well as how the piece was actually carved can indicate age, i.e. metal versus some other technique.

One must ask several questions, such as: Is the material from the period claimed? What kind of tooling marks or drill holes does it have? 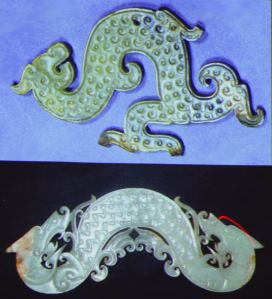 Does the piece have provenance that is documented and published. Are there other similar pieces on the market? What are the seller’s credentials? If the deal sounds too good to be true…….

In conclusion, Chinese jade is a fascinating entity and there are many fakes. When in doubt, consult with a true expert! 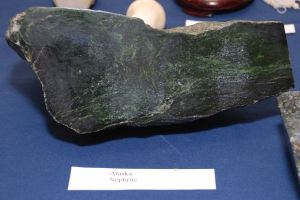 Raffle Tickets are sold at every meeting to help raise money to cover chapter costs. 50% of the money raised goes to the chapter and 50% goes to a lucky raffle ticket holder. 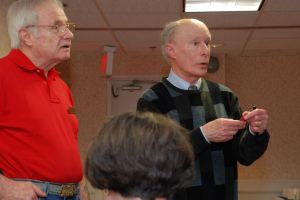 The lucky winner of the 50/50 Raffle Ticket was ?????. Everyone present was a winner in our hearts and minds.

Photos by Melanie A. Marts, G.G.