Ms. Dotson, a long time member of the Washington Chapter of GIA, explained the importance of jewelry in the Grand Tour. She kindly agreed to give her lecture when the scheduled speaker, Mr. Dayton Simmons, had to return home due to a family emergency.

Ms. Dotson’s Power Point presentation of pictures of pieces made by Grand Tour and ancient jewelers aided in seeing the parallels and similarities between the surviving originals and copies.

Ms. Dotson, a specialist in the art history of classical civilization, defined the Grand Tour in terms of place and time, noting that it occurred in the 18th and 19th centuries and was confined largely to Italy and Paris. 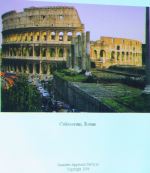 Although Italy dominated the Tour, by the late 1790s, Greece had also become a point of interest, as Europeans began to develop a sense of the history and archaeology that had occurred centuries before. Those participating in the Grand Tour were young, wealthy, Victorian males, just finishing their educations and training. The Tour might last as long as 8 years or just a few months. 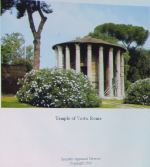 In Italy, the Grand Tourists were especially interested in seeing the ruins of ancient Rome, the newly-excavated Pompeii and Herculaneum, and a few of the cities of northern Italy, especially Florence and Genoa. As the period known as Romantic began to take root during the late 18th century, interest in wild, rural classical ruins came to the forefront and the tourers often chose to visit deserted classical ruins.

She then pointed out the importance of Heinrich Schliemann and his excavations that eventually uncovered Homer’s Troy. 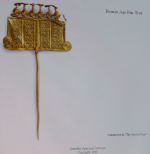 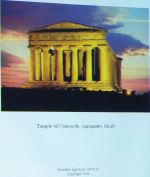 But more importantly, she showed her audience pictures of several of the pieces Schliemann and his teams discovered at Troy. She noted that in 1873, he discovered “Priam’s Treasure,” some 8830 pieces made from gold, silver, bronze, and electrum. Schliemann eventually presented this treasure, along with much of the rest of his discoveries, to the Berlin Museum. His excavation at Troy is that for which he is most famous, but as Ms. Dotson pointed out he dug at Mycenae and other Aegean sites during his long career, thus broadening his knowledge and experience of the region. Schliemann’s work in the late 19th century further popularized antiquity in a period when its popularity was already rising rapidly. 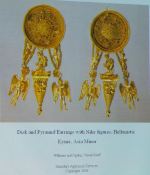 Ms. Dotson then turned to ancient and classical jewelry, noting that while the Greeks were not as productive of jewelry as Romans, they did produce much, especially gold. But much of that gold jewely has disappeared while lots of the silver and bronze pieces have survived. Other materials from which Greeks made jewelry included amber, bone, and ivory. They also used gem stones like carnelian, emerald, rock crystal, and garnet. 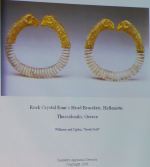 Greece did not have much gold, she noted, so the Greeks imported much of the gold they used for jewelry from Egypt, Nubia, and Spain where it was more plentiful. 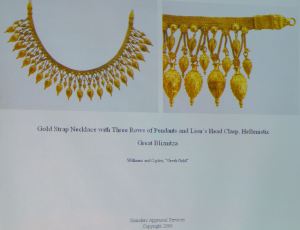 Alexander’s march to western India in the 330s-320s BCE moved through the ancient gold fields, not coincidentally, she noted.

Silver was far more abundant than gold in ancient Greece, but smiths usually had their customers provide them with the valuable metal which they then melted down to make the blanks from which they constructed the jewelry.

Ms. Dotson also noted about the precious metals that the gold of the eastern Mediterranean region was impure, ranging from about 2% to 25% silver and other metals. Thus, the jewelry made by ancient jewelers was often well designed and executed but made from mediocre metal. 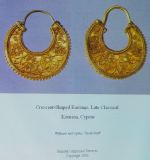 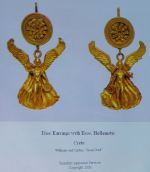 By the time ancient Greek jewelers began making jewelry they had developed or mastered a variety of techniques, including enameling and filigree, she noted. They seldom used gems with gold or silver, but enameled their jewelry and filigreed it as well.

Not until Alexander’s march in the 320s did the market for gem stones in Greece open up. Jewelers made their jewelry in pieces then soldered them together, not until quite late in the classical era did they begin casting their work, she pointed out. Roman jewelers followed on the patterns of the Greeks, but generally made more use of gems in their work.

Ms. Dotson then turned to a discussion of how classical jewelry influenced the Grand Tour and Grand Tourists, especially. Noting that Lady Palmerston, visiting Naples with her husband in the 1790s, commented on the various colors and tints of lava when she saw Vesuvius erupt, Ms. Dotson said it was in part to replicate some of this that Grand Tour jewelers made their jewelry.

Popular forms of jewelry during the era of the Grand Tour included cameos, micro-mosaics, and pietra dura. The vogue reached its peak in the 1860s and 1870s when Victoria herself was at the height of her power as England’s Queen and ruler of an empire that literally encompassed the Earth. As the popularity of classical antiquity increased in the late 18th and 19th centuries, Grand Tourists sought mementos of their visits-pieces like mosaics (often small enough to be worn as brooches or pins); suites of jewelry including earrings, rings, brooches, and necklaces/pendants; and pietra dura pieces. The themes that the jewelry emphasized included Troy, Pompeii and Herculaneum, mythological figures like Diana or Phoebe, famous ancients like Cicero or Caesar or Plato, and nature motifs like butterflies or doves. 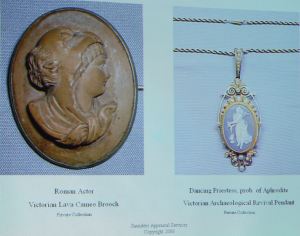 Ms. Dotson remarked that the popularity of Greek and Roman jewelry as models for Grand Tour jewelry stimulated interest in “Etruscan Revival” jewelry, made from archaeological styles associated with early Rome and her Etruscan precursor.

Those pieces that had survived centuries of burial in tombs, houses, and cities became models for jewelers in the 18th and, especially, the 19th centuries.

Copies of Etruscan, Greek, and Roman jewelry became quite popular and no Grand Tourist went home without purchasing some of those copies for mothers, sisters, nieces, sweethearts, fiancés. 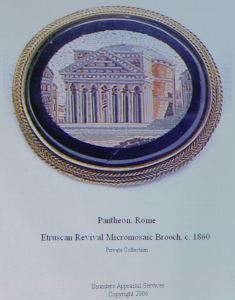 Ms. Dotson concluded her lecture by pointing out that several jewelers in the 19th century had perfected techniques used by ancients and passed those techniques on to their successors in the 20th. Those who missed this lecture missed a fine introduction to Grand Tour and ancient jewelry.

1 Response to Etta Dotson-Saunders and the Victorian Grand Tour