DCGIA was privileged to hear a power point presentation by Helen Serras-Herman about her evolutionary journey as an artist.

Part one consisted of family background and influence. Born to Greek parents in New York City, they moved back to Athens where she finished school.

She studied sculpture in Berlin. In 1983 she studied glyptography, gemology and became an FGA graduate.

She traveled a great deal and these travels inspired her imaginative designs in gem carving.

She moved to the Washington DC area and after many years sculpting in her studio in Annapolis, she and her husband moved to southern Arizona. Helen’s inspirations came from many sources; Greek mythology, Native American history, monster themes and the world of nature. Her talents were recognized and her fame recorded.

Part two was a lyrical summary of the many pieces she has produced, the influences that initiated them and the fantastic repertoire inspired by gemstones.

Part three showed Helen’s workshop and the overwhelming number of tools required to produce her exquisite works. I t was also a tribute to her artistic skills and patience in these productions.

In summary Helen is a fantastic artist with fabulous skills, wondrous imagination and unbelievable talent. 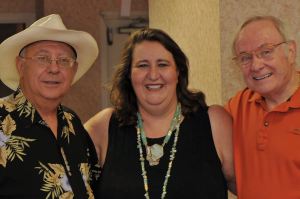