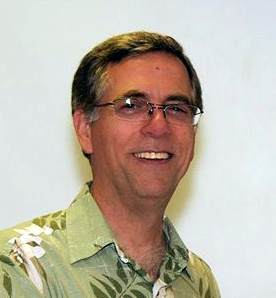 On July 7, 2010 the DCGIA Alumni Association was treated to Gary Roskin’s recounting of “an Evening with the Blues,” his experience with the world’s two, largest and most important deep blue diamonds, the 31.06 carat Wittelsbach-Graff, and the 45.02 carat Hope diamonds, both rare and storied stones.

Gary, owner of the online magazine, the Roskin Gem News Report http://www.roskingemnews.com is both a GG and an FGA and had the privilege and honour of being one of just 10 people invited to spend an evening in the presence of these two stones. The purpose of the evening was to compare the two deep blue diamonds to determine if perhaps they had at one point in time come from the same crystal. Ever since their discovery and travels to Europe by Jeanne Baptist Tavernier in the late 1600s, gemologists have been waiting for an opportunity to test these two diamonds together, and Gary was there to document the evening.

An evening with the blues

The event occurred on Thursday evening, January 26, 2010, just two days before the Wittelsbach-Graff was to go on display with the Hope Diamond in the Harry Winston Gallery at the Smithsonian’s Museum of Natural History. Having the world’s second largest deep blue diamond coming to the Smithsonian meant that maybe, if the Wittelsbach-Graff arrived early enough, there just might be an opportunity to compare the two great diamonds. But the timing had to be just right, and everyone involved had to be ready at a moment’s notice. Gemologists from GIA and mineralogists working with the Smithsonian were ready. 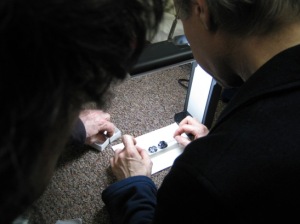 On Wednesday January 25th, Gary received an early afternoon phone call from Jeff Post, curator of gems and minerals, and was told that if he could be in D.C. by late afternoon the following day, he would be able to report on “the evening of discovery.” Needless to say, Gary was on the southbound Amtrak the next day!

The Smithsonian is not just a museum; it is a top-level research facility and so it was only natural that they would want to test the two diamonds. The Hope, in celebrating its 50th anniversary at the gem hall, had been on display loose, out of its Cartier necklace. The Wittelsbach-Graff arrived also loose to be displayed until Aug. 1. It was the perfect time to examine these two stones, but the window of opportunity was only a few hours.

The testing of these two stones took place in the “blue room,” where valuable gems and minerals are stored when not on display. Along with Gary and Jeff were John King, Wuyi Wang, and Robert Weldon of GIA; Chip Clark, photographer for the Smithsonian, Henri Barguirdjian, CEO of Graff; Eloise Gaillou, post doc with the Smithsonian, Jim Butler from the US Naval Research Lab, and John Hatleberg, gem artist. John was there on behalf of Graff to create a replica of the Wittelsbach-Graff and specifically to compare the colour of the W-B to the Hope diamond. John has reproduced many famous stones, including the Hope!

The Wittelsbach Blue was a 35.56 ct. blue diamond purchased in 1664 by King Phillip IV of Spain for his teenage daughter, Margarita Teresa who married Leopold I of Austria. The stone stayed with the family until Leopold’s granddaughter married Charles of Bavaria in 1722. Bavarian royalty took on the last name of Wittelsbach, and the diamond did so as well. The stone eventually “disappeared” in 1931 after it apparently failed to sell at an auction. It resurfaced in 1958 at the World Exhibition and briefly in 1962 when, ironically, a cutter refused to recut it after recognizing it’s historic significance. Fast-forward to 2008, when Laurence Graff buys the stone at auction for a cool $23.4 million and has it recut to a 31.06 cushion, repairing years of damage and improving the appearance. The merits of recutting or lack thereof will be debated for years. However, according to Gary, many in the room that evening noted that the recut version is a vast improvement over the original.

Much of the early part of the evening with the two stones was spent photographing them – both the glamour as well as the phosphorescence shot. Chip Clark, who sadly passed away in June, was a master photographer, and captured the two diamonds perfectly. Even though the stones are both labeled fancy deep blue by GIA, with the Wittelsbach having such a large window – created by the extremely large culet – Chip had to finagle the lighting in order to get the two stones to face up equally. The final lighting combination happened by accident, which we all saw on Gary’s video. 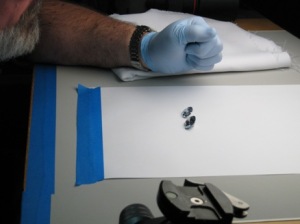 The gem testing included infrared and phosphorescent spectroscopy, along with the use of a polarizing microscope to examine and compare internal growth patterns. Initial testing, including a similar phosphorescence, gave some hope that the two stones might be “brothers”. Even though the Wittelsbach-Graff phosphoresces longer than the Hope, the two colors were so similar, they certainly could have been related. Regardless of the initial similarities, as the night wore on, it became apparent – especially from the internal growth patterns – that alas, they were not from the same crystal, thus giving each stone its own birthright.

Many thanks to Gary for sharing his pictures and information!