Mr. Luchsinger’s presentation provided an insightful and fascinating look at Van Cleef & Arpels. Van Cleef & Arpels (VCA) is a family love story between Alfred & Estelle. Founded in 1906 by Alfred Van Cleef and his brothers-in-law Charles and Julien Arpels on 22 Place Vendome in Paris, the firm has since expanded across the globe and become known for creative design, top-quality materials, and iconic trademarks.

Van Cleef and Arpels made numerous contributions to the history of jewelry design, in 1930, a new type of accessory: the minaudière. The fore-runner of the ladies compact. The minaudière is a type of vanity case. Constructed from gold or silver, it takes the form of a box. 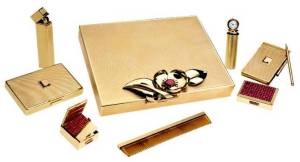 When opened, it reveals various lady-like essentials: a comb, a case for lipstick, a lighter, small compartments for cigarettes, change, and powder. 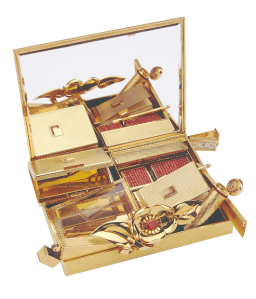 The inspiration for the design came from a friend and client: Frances Gould, wife of American railroader Jay Gould. Gould apparently rushed to a meeting with Charles Arpels, tossing her necessities into a tin Lucky Strike cigarette case. Arpels took the idea and made it his own.

He named it for his wife. The French verb minauder means, roughly, to simper or smile coyly. Madame Van Cleef’s simpering was famous. The minaudière was wildly popular for decades. Women carried them in custom-made, fabric pouches.

Another major contribution was the introduction, in 1935, of a technique of gemstone setting called invisible setting (serti invisible). The setting is named for its appearance. When gems are invisibly set, it appears as if nothing is holding them in place: no prongs, bars, or bezels. One is simply presented with a collection of continuous, geometric gems. As a matter of fact, the gemstones are secured on their undersides by a metal grid into which each stone is fitted and held in places by small grooves. Setting gemstones in this way allowed for a new aesthetic in jewelry design. Many of VCA’s signature pieces feature this technique.

From 1909 to 1939, Van Cleef & Arpels prospered and opened boutiques in holiday resorts such asDeauville, Le Touquet, Nice and Monte-Carlo. 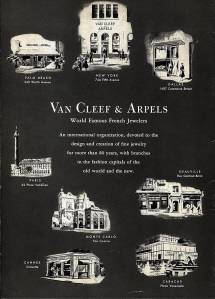 VCA has created impressive pieces in every design period throughout the twentieth century.

In the 1940’s, for instance, it created widely-copied, charming ballerina brooches.

Van Cleef & Arpels has been associated with events that have marked the lives of princely, royal and imperial families around the world, like that of His Royal Highness Don Antonio of Orléans and Grand Duke Dmitri in the 1920s, Princess de Faucigny Lucinge, Baron Thyssen, the Duchess of Windsor and the Duke of Westminster in the 1930s, Queen Nazli and King Farouk of Egypt, Baron James de Rothschild, Countesses de Rohan Chabot and d’Harcourt, the Maharani of Baroda, Queen Sirikit of Thailand in the 1950s, and then, in the following decades, Baron Guy de Rothschild, the Queen of Spain, the Princess of Wales, Prince Rainier and Princess Grace of Monaco, Shaw of Iran, etc. 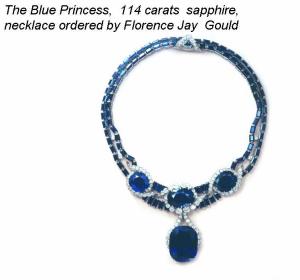 All VCA pieces are Numbered and documented in VCA Archives.

We thank Mr. Nicolas Luchsinger once again for sharing his knowledge, time and the above slides & pictures with us, as we appreciate the opportunity to learn from experts in the trade.