Mr. Ulysses Grant Dietz is a specialist in American material culture and decorative arts, covering the 1600s through the present. Mr. Dietz does not let an object’s superficial qualities obscure its significance. Jewelry for instance is most important for its art form or its place in a design  movement.  Not for its being drowned out by stones that practically scream and sparkle their magnificence.

The Glitter & The Gold: Fashioning America’s Jewelry by Ulysses Grant Dietz
This book is an exploration of jewelry produced in Newark, New Jersey – America’s fine jewelry capital – from 1850 to 1950. The book contains never before published  documents concerning this little known jewelry empire.

If you made it to this lecture Mr. Dietz was most informative in sharing Newark as a Jewelry Mecca. If you missed it, buy the book or visit Newark and see what is left!

Prior to the 1800s and the rise of Newark Jewelry Manufacturing, Jewelry was for Aristocrats and Millionaires. Newark’s rise in jewelry manufacturing made jewelry available to the middle class housewife.

In the 1900s Tiffany & Company made all their silver in a Newark manufacturing plant. T&C (along with many other high end retailers) purchased many low cost pieces of jewelry from other Newark manufacturers to supplement their high end designs.

The idea was that a $2K – $3K designer piece brings traffic into the store, but the hope was to have middle class buyers leave with a $200 or $300 item.

This Newark jewelry often had a Tiffany & Company hallmark, but would sometimes have only the Newark manufacturer’s hallmark or both hallmarks stamped. Skinner’s Auction Guide will often provide a good history on a piece, providing both the retail sellers and manufacturers pedigree. While the high end retailers would rather not mention it.

Newark jewelry was known for platinum, gold and colored stones during the 1900s, but  manufacturing came to an end in 1997, due to economic and over seas pressure.

The DCGIA Chapter thanks Mr. Dietz for a wonderful lecture that started our year with great attendance and enjoyment for everyone present. 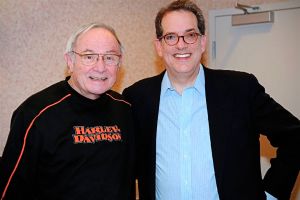