It was a pleasure having Yvonne J. Markowitz provide the chapter with in-depth information on the relationship between George Frederick Kunz and Tiffany as well as his other accomplishments.

Yvonne is the Rita J. & Susan B. Kaplan Curator of Jewelry in the David & Roberta Logie Department of Textile and Fashion Arts, Museum of Fine Arts, Boston  http://www.mfa.org/collections/jewelry . Yvonne was much more informative than this post can possibly be, so if you missed it, you missed a very great presentation.

George Frederick Kunz was born in New York City, USA, and began an interest in minerals at a very young age.

In a series of published interviews with Marie Beynon Ray of The Saturday Evening Post, written in the late 1920s, Kunz recalled a particularly exciting visit to P.T. Barnum’s American Museum on Ann Street & Broadway in NYC. The year was 1865 and Kunz was nearly ten. Among the various oddities to be seen and experienced was a mineral display – the collection of a Mr. Bailey. Young Kunz was hooked—he wanted to begin his own collection.

Mid-19th century, NYC Public works projects and Hoboken, NJ provided a steady supply of rich and varied mineral deposits up to the surface. So, in many respects, the extraordinary geology of the area was Kunz’s backyard.

Kunz later stated “…all the pioneering engineering projects of the area offered virgin soil to the collector of minerals.”

By his mid-teens, Kunz was a serious collector of minerals. Some were acquired during his many excursions, others the result of exchanges with fellow collectors. His correspondence both in America and abroad was extensive, as evidenced by the extraordinary number of surviving letters. Throughout his life, it was Kunz’s habit to build a collection, sell it at a profit, and then use the funds to form yet another collection. Some collections were general, as in the assemblage of 4,000 minerals sold to the University of Minnesota in 1876 for $400. Afterwards, he sold another collection to the Polytechnic Institute in Indiana, a third to Amherst College in MA, and another to the State Museum in Albany, NY. The four collections together numbered 20,000 mineral specimens. One collection—that of meteorites—was a personal favorite and added to over the course of his lifetime.

Kunz attended Cooper Union but did not finish and did not attend college. Nonetheless, he taught himself mineralogy from books and field research. This expertise landed him a job with Tiffany & Co., and his knowledge and enthusiasm served him and Tiffany & Co., well providing gem acquisitions used in Tiffany jewelry. Kunz also assembled private mineral collections, one being the Morgan-Tiffany collection of gems in the American Museum of Natural History.

As a foremost gemologist and mineralogist, he was amazingly prolific in writing over 300 books and articles on a diverse variety of titles. While at Tiffany’s, George Kunz created a set of books for Tiffany and Co. to give each year to its customers: Natal Stones, Sentiments, and Superstitions associated with Precious Stones.

Kunz began his writing career in the early 1880s, with articles appearing regularly in the Transactions of the N.Y. Academy of Sciences, the American Journal of Science and Popular Science. By 1890, he had completed his first book entitled, Gems and Precious Stones of North America. That same year, he traveled to Mexico, visiting Queretaro where the only gem systematically mined was the fire opal, a variety of opal that shows flashes of red, orange, yellow, and green. Kunz visited the mines as well as the cutting facilities, noting that the stones cost from $1 to $1000, depending on size and quality. Kunz was very attracted to the stone and returned to New York with a cache of cabochons, some of which were probably incorporated into this ornament known as the “Aztec” collar. Designer Paulding Farnham was also fond of the stone and cognizant of its source, drawing on motifs from the ancient Americas for the necklace’s design. Highlighting the warm glow of the gold and opals in this ornament are diamonds, rubies, tourmalines, peridots, and zircons—another Kunz favorite. The collar was exhibited at 1900 Paris Exposition and is now part of the Tiffany Archives collection. 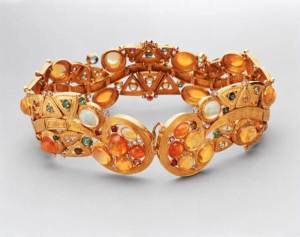 Tiffany jewelry at exposition, was a great success, thanks to the design efforts of Paulding Farnham and the extraordinary gems acquired by Kunz. Probably one of the most dramatic suites was this diamond and aquamarine parure.

Kunz’s in-depth knowledge of American gem materials was furthered by his activities on behalf of the U.S. Geological Survey. The USGS, an arm of the Dept. of Interior, was established in 1879. Part of its mission was to examine and report on the geological structure, mineral sources, and products of the national domain. The first director of the bureau was Clarence King, the geologist credited with exposing the diamond hoax and an innovator in surveying techniques. Both Kunz and Tiffany must have been thrilled when Kunz was appointed special agent to the USGS in 1883. The position gave Kunz (and Tiffany & Co.) access to sites, statistics, and commercial gem-related operations within and outside the U.S. It also allowed Kunz to expand his network of contacts among geologists, mining engineers, government officials, and businessmen. Each year Kunz summarized all he had learned throughout the year in the Survey’s annual report. 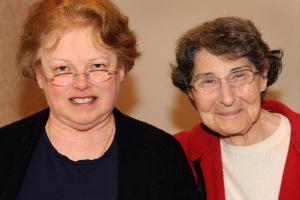 Pictures of speaker and members by Melanie Marts, GG