Çigdem Lüle, PhD, FGA., GG (GIA) is a Turkish born research gemologist and mineralogist. Çigdem works at Gemworld International in Chicago (Email: clule@gemguide.com) and spent the weekend providing training for ASA at Martin Fuller’s office. Çigdem graciously accepted our request that she share with the chapter.

Museums display gemstones, many of which go misidentified or unidentified. Often you will find that identification plates in a museum provide lots of information on a piece of art or other object, but only a single word on a gemstone. Any gemologist can provide identification, but archaeologists really want to know where it is from or how it got here, more than what it is. The interest is in the storied history of the find.

Archaeogemology combines aspects of gemology, archaeology and geology in order to identify ancient gems and determine their mineralogical and geographical origin. Chemical and mineral make up of gemstones will often provide the geographical location for the gemstones creation. Color and inclusions of many gemstones are caused by specific mixes of minerals often found in specific geographical locations. Archaeogemology sometimes can corroborate ancient texts describing treatment recipes used by ancient lapidaries and attest to origins for which other evidence is scant or tenuous. The problem is comparing or
matching ancient gemstones, that may be from areas that stopped being used centuries ago, to modern day rough or gemstones. Archaeology is needed to trace down and find these ancient sources.

The importance of archaeogemogolgy is to contribute gem origin based information to aid in the investigation and knowledge of social patterns such as migration and the trade routes of ancient cultures and civilizations. There are very few publications on ancient
gemstones and where they came from (country of origin). Why was the origin of gemstones not known? Traders and merchants often monopolized their business by hiding their sources with false stories and fairy tales to ensure future business.

Most jewelry in archaeology is found in graves or baths. Which makes the Roman Empire and the propagation of baths throughout the empire very important to archaeology and ancient jewelry.

To understand the ancient societies you can follow trade routes. Spices were very important in the curing and preservation of food without refrigeration. To be ‘worth one’s salt’ is to be worth one’s pay. Our word salary derives from the Latin salarium,
(sal is Latin for salt). For thousand of years salt was highly prized, the expression comes from the Roman army paying it’s soldiers partly in actual salt or in money to buy salt. Spices were small, dry, not perishable, and light in weight, making them easy to transport
over long distances. Gemstones likewise were also small and light making them an easy addition to any traders goods.

The super highway of ancient times was the Silk-Route, where you can see how spices, silks, gemstones as well as cultures and religions moved back and forth between China, India, Persia, Turkey, Arabia, Egypt, Rome and Europe. It was not a single road but many roads into remote regions that linked traders, merchants, pilgrims, monks, soldiers, nomads, and urban dwellers together. Sea routes were also open and eventually became the primary routes of commerce.

Alabanda is a newly excavated site by Turkish Archaeologists. Historical stories stated that red garnet was mounted in the city walls. Excavation of Alabanda city walls, which were made out of local sourced rocks, contain red garnets naturally embedded in the rock. 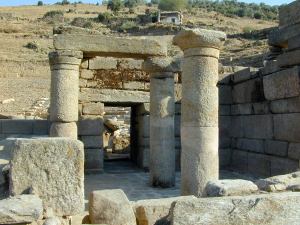 The ancient Persians believed that the earth rested on a giant sapphire and its reflection colored the sky. Çigdem shared this ancient Sapphire to prove it.

Faceted stones were not common in ancient times, it is a relatively recent practice starting sometime in the 15th century. So to see an ancient stone polished in this fashion shows that “Old does not necessarily mean Primitive” as mastery was required to create such a piece.

DCGIA thanks Çigdem for providing us with such an informative and interesting evening.