“Gold of the Ancient Americas” by Julie Lauffenburger

Julie Lauffenburger, object conservator and technical researcher at the Walters Art Museum, shared her passion for conservation and curating duties for the Gold in the Ancient Americas exhibition. Julie provided an insightful presentation of centuries-old artifacts including pendants, beaded necklaces, gold-sheathed ear rods and nose ornaments from the Walters’ Central and South American collection.

A self-described history nerd and fascinated by material culture, Julie says preserving art ensures that material culture from around the world will be there for future generations to discover. Material culture is the physical evidence of a culture in the objects and architecture they make, or have made.

As curator for the exhibition, Julie was responsible for creating a narrative using objects to illustrate what she thought was important to tell about gold in the ancient Americas. Her discussion explored a mix of art and science, telling the story of ancient societies through their use of gold as a symbol of power, wealth, and privilege, and highlighted the methods used by ancient American goldsmiths before the Spanish conquest.

Quoting from Albrecht Durer (German artist and painter 1471 to 1528): “I saw the things which have been brought to the king from the new land of gold. All the days of my life I have seen nothing that rejoiced my heart so much as these things.”

Exploring the view point of the Spanish and exploration, Julie discussed the northern Andean regions of Peru and Colombia. King Charles V expanded the search for gold in the new world while imposing Christianity on the people. When the Spaniards captured the gold hordes of Mexico and Peru, Gold to the Europeans meant wealth and power. The gold artifacts in many museums are just a small percentage of what existed in these cultures, the largest majority of gold artifacts was melted down and shipped back to Spain. Spaniards noted that even commoners had gold objects, it was not only held by the nobles.

Spaniards spared no effort in confiscating as much gold from the New World as possible and ship it back to the Spanish monarchy as quickly as possible. To provide perspective, between the 16th to 18th centuries Spanish mines in Mexico and Peru supplied 80% of the world gold and silver at the time.

Map showing main Portuguese (blue) and Spanish (white) oceanic trade routes in the 16th century, as a result of the exploration during the Age of Discovery. Showing the Spanish colonial Manila-Acapulco Galleons route (1565-1815) between the Viceroyalty of New Spain (México) and the Spanish East Indies (Philippines), using the ports of Acapulco and Cavite.

Things of value used for tribute by the Inca: gold beads, textiles, jade, feathers, cotton, leather and shells. To the Inca gold was the sweat of the Gods and Silver the tears of the Moon. The Inca practiced basic mining accumulating a great deal of gold and silver by the time the Spaniards arrived. The Inca were fond of gold and silver and used it for ornamentation and for decorating their temples and palaces as well as for personal jewelry. Temples of the sun and temples of the moon were literally wrapped in gold and silver plate. Gold working in the Americas was a tradition dating back 3,000 years. 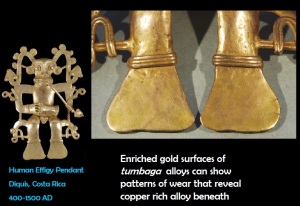 Julie explained the process used to make gold objects by ancient American goldsmiths from Peru to Mexico. What we learned is that there is a bit of science involved, with the use of x-radiography the inside of objects can be seen and help determine how it was made. X-ray fluorescence spectrometry (XRF) is used for determining the major element composition of metal alloys, which is namely copper, silver, and gold. Indigenous South Americans had full metallurgy with smelting and various metals being purposely alloyed.

Julie shared her knowledge of the many methods of artifact production. Many pieces were made out of hammered sheet metal and assembled with mechanical joints such as tabs. Ear spools worn in the ear as ornaments, made from colored metals with inlays of blue stone and shell. Julie deconstructed an ear spool, Monkey bead and other gold objects showing via x-ray photos how they were put together. Different styles were used in the different regions of the Americas, including lost wax mold casting was used with varying degrees of finishing work afterwards.

DCGIA Thanks Julie for sharing with us!