Carl Fabergé’s jewelry workshop made Fifty (50) Imperial Easter Eggs for the Russian Imperial family, from 1885 to 1916. Each taking a year or more to craft, and according to Fabergé, designs were produced in secrecy, “the only prerequisite being that they contained a surprise.”

After the overthrow of the Tsar in 1916, the Soviet Communists sold many Imperial treasures including the Fabergé eggs as part of a policy of turning “treasures into tractors.” The introductory 45 minutes of Dr. Wilfried Zeisler presentation is available in the following video:

The Imperial Eggs can be seen at the Fabergé Website

Hillwood Museum will be displaying their Fabergé jewelry and eggs in an exhibition Fabergé Rediscovered from June 10, 2018 thru January 13, 2019

Ten (10) Eggs were produced from 1885 to 1893, during the reign of Emperor Alexander III. His son, Nicholas II continued the tradition adding forty (40) Eggs during his rule as Tsar of Russia. Two Eggs each year, one for his mother and one for his wife.

Of the 50 eggs 43 have been found, some as recently as 2001 and 2011. The Imperial Eggs can be viewed on the Fabergé Website.  Eight (8) were thought to have been lost. Five (5) are assumed destroyed, as there is no reference to them after 1916. If they have survived, their locations remain a mystery. 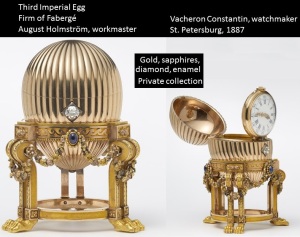 The Third Egg: Tsar Alexander III’s 1887 Easter gift to his wife, Tsarina Maria Feodorovna, was on the brink of being melted down for scrap in the U.S. in 2011, before being identified.

Its rediscovery has raised the prospect that seven others are sitting in dusty attics or on mantelpieces, as unidentified trinkets worth millions of dollars.

Where are the forty three (43) Fabergé Imperial eggs today?

Because of the Russian Revolution, Two (2) eggs were never finished or presented.
1917 Constellation Egg  – Made for Tsaritsa Alexandra Feodorovna.
Two eggs are claimed to be the Constellation Egg:

Considered lost until 2001, it is currently displayed at Ivanov’s Fabergé Museum in Baden-Baden, Germany.

The DCGIA Members enjoyed Dr. Wilfried Zeisler’s informative presentation and we look forward to a field trip to the Hillwood – Fabergé Rediscovered exhibit this summer!