The March 15th DCGIA meeting allowed members to hear from Izzy Heller, originally from South Africa near Capetown, Izzy became a jeweler and author after he moved to America in 1980.

Izzy said, “In my former life in South Africa, I was neither a jeweler nor a writer, I was in the family food business.” The Heller’s owned factories that produced grain products.

Izzy and his wife, Zelda, only considered leaving South Africa after their two children, planned to move to the U.S. to pursue degrees at Georgetown University.

It was around that time that Zelda acquired an interest in antiques and became a gemologist, which led the couple into the jewelry business.

Izzy and his wife Zelda lived in Chevy Chase and owned a jewelry shop on Wisconsin Avenue. “We had a tiny little shop front but we did big things,” Izzy says. Izzy’s life contains some  interesting and compelling tales, told in his book – Secrets of a Jeweler.

Their one-of-a-kind pieces, such as several Pablo Picasso silver platters, attracted the attention of wealthy residents, and the Hellers began to make a name for themselves within Washington, D.C.

One of his clients was Winton Malcolm “Red” Blount, postmaster general under President Nixon. A hotel concierge recommended Heller’s shop to Red after his wife had forgotten her jewelry in Alabama, and she needed something to wear to the White House.

Over the years, Izzy has had the opportunity to sell to the famous, ambassadors, politicians and celebrities, including the late actress Lena Horne. He once sold a $3.25 million necklace to an unknown buyer (Saudi Princess perhaps?) who used a New York agent to make the purchase.

Deadly Truth: A Novel Based Upon Actual Events in South Africa Under Apartheid:
The authors paint a vivid picture of life in South Africa covering the years 1960 through the Truth and Reconciliation trial. This is a suspenseful novel based on fact, and a must-read for anyone who wants to have a better understanding of South African life during the Apartheid years.

Secrets of a Jeweler: Shhh . . . your jeweler’s listening!
Izzy Heller has plied the jewelry trade for 30 years in the Nation’s Capital – Secrets of a Jeweler is a behind the scenes glimpse of a jeweler that is equally insightful about human nature. Written with heart and soul, like the Author, it is both fascinating and funny.

Death in McMurdo:
As reviewed by William S. Cohen – Former, U.S. Senator & Secretary of Defense
Death in McMurdo has everything–history, theology, gemnology, romance, a jewel heist, and a crime of passion–all taking place in the most remote and unforgiving part of our planet. Israel Heller, a man of many talents, has produced a mystery novel that is a masterpiece.

The FREE Raffle for a $50 Education Voucher was won by Gerry Cox.

Additionally, Izzy donated thirteen of his books, which were all raffled FREE to those present at the meeting. 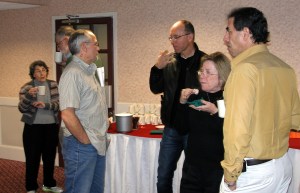